Why Is the UK in Recession?

It’s 2023 and the UK economy is reportedly in recession for the second time in three years. So, how did we get here? Why is the UK in recession?

The answer is largely down to inflation and rising interest rates, but in order to fully understand the events which have led the UK to recession we need to rewind to the beginning of 2020 and the rapid spread of a new viral disease. 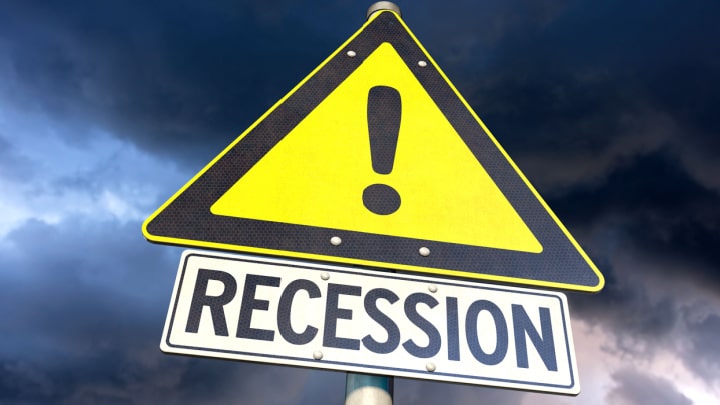 What Is a Recession?

However, before we look at any of that, let’s first clarify what we mean by “recession” and how it can be caused by high inflation and rising interest rates.

A recession is a period of economic decline which is traditionally identified by two consecutive quarters of negative economic growth.

The most common way of measuring GDP, and thereby determining economic growth, is by adding up total expenditure within an economy. This sum is comprised of four parts:

Consequently, any changes to these components will have a knock-on effect on an economy’s growth. Of these four components, household consumption tends to be the largest, accounting for 60% of the UK’s GDP in 2021.

Furthermore, there is an equivalent impact on investment. Due to inflation and higher interest rates, companies find it more difficult to invest and consequently cut back on this expense, leading to a reduction in this component of GDP as well.

So, in order to answer the question ‘why is the UK in a recession?’ we need to examine why inflation and interest rates have been rising.

The Role of Covid-19

On 23 March 2020, following the arrival of Covid-19 and its first reported deaths, the United Kingdom entered lockdown. People were told to stay at home, those with symptoms were told to isolate, non-essential businesses were forced to close their doors and travel was banned.

Despite intervention from the Bank of England (BoE) - in the form of slashed interest rates and increased quantitative easing – and generous government schemes to ensure furloughed workers continued to be paid, the UK quickly slipped into recession. By the end of the calendar year, the UK economy had shrunk 11%, its largest contraction in 300 years.

Despite economic growth quickly returning to positive territory, varying degrees of social restrictions remained in force until 2021 when, in February, restrictions began to ease, practically disappearing entirely by the end of July. Nevertheless, it soon became apparent that the economic after effects of Covid-19 were going to cause issues.

The First Signs of Inflation

Here were the first signs that inflation may soon become the next global challenge, a problem exacerbated in the UK by more than a decade of loose monetary policy and generous pandemic-era fiscal stimulus from the government.

As prices began to rise, there was one commodity whose rising price signalled that things could get worse: oil.

Rewinding back to 2020, the rapid spread of Covid-19 around the world and the consequential lockdowns took its toll on oil prices.

With people confined at home, cars sat idly in driveways and planes remained grounded. Consequently, demand for oil plunged, and so too did price. It seems beyond comprehension but at one point in April 2020, WTI crude oil futures were trading at negative $37 a barrel.

For the first time in history, people were actually paying others to take crude oil future contracts off their hands!

The Organisation of the Petroleum Exporting Countries (OPEC) and its allies were swift to act, cutting production targets in an attempt to shore up oil prices. Gradually, these cuts began to take effect, and the price of oil returned to pre-pandemic levels in February 2021.

As the world reopened, demand for oil soared and OPEC+ gradually began to roll back production cuts. However, it turns out that, when it comes to oil production, it’s far easier to turn off the tap than to turn it back on. As oil demand continued to climb, many OPEC members were unable to meet their production targets, leading to further price increases. Consequently, at the close of 2021, crude oil was trading well above pre-pandemic levels.

In an environment where prices are already rising, high oil prices are problematic. Regardless of the amount of lip service which gets paid to the global transition to greener energy sources, the reality is that crude oil remains the lifeblood of the economy.

This means that the price of oil has a knock-on impact on the price of other goods and services. Increasing oil prices translated into higher input costs for businesses, which inevitably got passed onto consumers, causing inflation to increase further.

In March 2021, Russia began a significant military build-up close to their border with Ukraine. In October 2021, Russia again began massing troops close to the Ukrainian border, this time in Belarus as well. Despite numerous denials that it was planning an invasion, on 24 February 2022, Russian troops entered Ukraine.

At the start of 2023, war in Ukraine is ongoing, with no clear end yet in sight. As well as being utterly disastrous from a humanitarian perspective – tens of thousands are estimated to have lost their lives and millions of Ukrainians have been displaced from their homes – the economic effect of war has been felt around the world.

Russia is one of the world’s largest producers of both oil and natural gas. Following news of the invasion, fears surrounding a disruption to Russian supply caused both oil and gas prices to quickly spike to their highest levels in years. A splurge of Western sanctions against Russia followed, contributing to high prices persisting throughout the year.

High oil and gas prices have led to a dramatic increase in energy bills, which has reinforced the overall upward effect on prices.

So far, we have only specifically mentioned energy when it comes to rising prices, but at the beginning of 2022, food prices were also at record highs. With both Russia and Ukraine being major global producers of a variety of food staples, the outbreak of war caused global food prices to rise even further.

Both of these factors have fed back into global inflation, pushing prices around the world higher still. In the UK, inflation in the 12 months leading up to November 2022 was reported at 10.7%, more than five times higher than the BoE’s target rate of 2%.

All of the above factors have forced prices to rise, leading to the UK reporting its highest levels of inflation in 40 years.

Identifying rising inflation as an issue, in December 2021, the Bank of England (BoE) became the first major central bank in the world to begin hiking interest rates in an attempt to curb rising prices. As of January 2023, the BoE base rate stands at 3.5%, having been 0.1% at the beginning of December 2021.

Interest rates are one of the most important tools a central bank has at its disposal to tackle high inflation. Higher interest rates reduce discretionary income, meaning that consumer demand inevitably falls. All else being equal, a fall in aggregate consumer demand will eventually lead to prices falling, thus reducing the level of inflation.

However, as well as reducing prices, in the right circumstances, a fall in demand can also spark a recession as GDP falls. Unfortunately, this is the position in which the UK finds itself and increasing interest rates, whilst necessary to combat inflation, have also contributed to pushing the UK economy into recession.

A Recession Three Years in the Making

A combination of unusual events have conspired to drive UK inflation to its highest level in 40 years and interest rates to their highest level since the Great Recession in 2008.

Consequently, the UK economy has come under pressure, shrinking by an estimated 0.3% in the third quarter of 2022, and leading economists to surmise that the country is currently in recession.

Although we have been looking at this strictly from a British perspective, it’s worth remembering that the issues highlighted are global, with the International Monetary Fund (IMF) cautioning that a third of the world will enter recession in 2023.