If you have been paying attention to the news in recent weeks you will have no doubt read about the prospect of interest rate rises this year. But what does this mean for investors? How do interest rates affect the stock market? Is there any correlation between rising interest rates and stock prices?

In this article, we will answer these questions and explain in depth how interest rates affect the stock market. 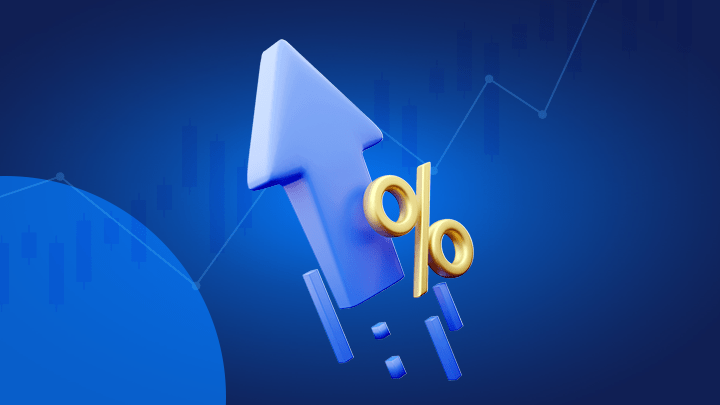 What Is the Base Rate?

Interest rates play an important role in our everyday lives. Whether it’s interest we earn on our savings or interest paid on our credit card bill, interest rates directly impact our bottom line.

Whilst all the interest rates we encounter in our day to day life may be different, they all take their cue from the base rate.

The base rate is set by a nation’s central bank. In the UK, this is the Bank of England. In the US, it’s the Federal Reserve. And the European Central Bank is responsible for setting the base rate for the entire eurozone.

Why Does it Change?

The base rate of interest is the most powerful tool a central bank has at its disposal for managing the economy and is an effective way for them to control inflation and economic growth.

To put it in its simplest terms, when interest rates are low, as they have been for some time, people and businesses have greater incentive to spend and invest. This increase in consumption and investment promotes economic growth, but also has the effect of increasing prices if supply struggles to keep up with increasing demand (a situation we currently find ourselves in).

On the other hand, when interest rates are higher people and businesses spend and invest less as the cost of borrowing increases and there is a greater incentive to keep money in the bank earning higher interest. This decrease in spending helps push prices down and also slows economic growth.

So, how do interest rates affect the stock market?

Generally speaking, interest rates and stocks have an inverse relationship.

Rising interest rates increase the cost of borrowing for both people and businesses and this has four key knock-on consequences:

We can split the four above consequences into two sections, the first of which is how rising interest rates directly affect businesses and, therefore, share prices.

When companies cut back on future growth and their profit falls, their estimated future cash flow will also fall. All else being equal, this will result in share price falling as the company becomes less attractive to both existing and prospective investors.

Rising interest rates don’t just affect companies directly, but also indirectly through a change in consumer behaviour. In essence, these second two consequences are the same as the first two, the difference is that this time, it is happening to the consumer.

An increase in the cost of borrowing reduces the incentive for consumers to borrow money to fund big ticket items, such as houses, electrical appliances or furniture. Moreover, existing debt, such as a mortgage, becomes more expensive to service, reducing the amount of income a consumer has after taxes and other necessities are deducted, also known as discretionary income.

Both of these factors lead to a reduction in overall consumption, but who suffers from the fall in consumption? Businesses. A fall in consumption can also be viewed as a fall in sales for businesses, which results in less profitability, which leads to less investment for future growth.

Therefore, the indirect result to businesses has the same effect as the direct result, less profit and a reduction in future growth, meaning that estimated future cash flow will also be less. All things being equal, this will tend to cause share price to fall.

Businesses operating costs will be lower, and they will tend to invest more in future growth for the company. Similarly, consumers will have more discretionary income which will lead to an increase in consumption.

The result is that lower interest rates tend to cause share prices to increase. Interest rates, which have been held at record lows since the financial crisis in 2008, have played their part in the global stock market hitting record highs in recent years.

Amidst the rumours at the beginning of 2022 that the Federal Reserve was considering hiking interest rates, you may have noticed that amongst the worst casualties in the stock market were tech stocks. Is there a particular relationship between tech stocks and interest rates? Are tech stocks particularly sensitive to rate changes?

When picking investments, the standard practice among professional investors is to “discount” future profits. This is done to simulate the fact that a dollar today is considered more valuable than a dollar in the future.

In the calculations used for discounting future profits, the interest rate plays an important role. The higher the interest rate, the less valuable future profits are deemed to be. As tech stocks often have low, and sometimes no, profits today and huge potential profits in the future, rate rises tend to have a bigger impact on them than other groups of stocks.

Of course, as with most rules, there are always exceptions and when it comes to how interest rates affect the stock market – banks and insurance firms are a couple of the exceptions.

As for insurance firms, due to the nature of their business, they are obliged to hold a large amount of safe debt in order to back their policies and when interest rates are higher, this safe debt generates more income.

Hopefully you should now have a better idea of how interest rates affect the stock market and why investors have been paying so much attention to them recently.

Whilst the relationship between interest rates and stocks is far from straightforward, they tend to move inversely, with bank and insurance stocks being the main exceptions to this general rule.