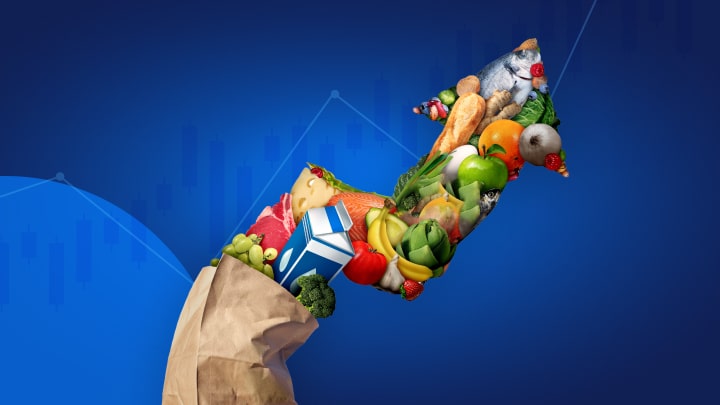 If you believed that rising inflation was coming to an end, you would be wrong. Inflation in the 12 months leading up to September 2022 was reported at 10.1%. The Bank of England (BoE) expects this figure to reach around 11% in October, largely fuelled by higher household energy bills.

The BoE further predicts that inflation will begin to fall next year until it reaches its target rate of 2% in around two years’ time. But what would it look like for our outgoings if inflation remained at 11%?

We decided to illustrate how higher inflation could affect ordinary people by applying this forecast rate of inflation to the price of an essential, non-negotiable expense, the weekly grocery shop.

Looking at the existing expenditure on weekly groceries for the average family in the UK, we have calculated that by the end of the year, the average price of a weekly shop could cost £76.81. If inflation remained constant, it could cost £177.02 per week for groceries by 2030. That’s £771.28 per month, or £9,204.84 per year.

To put this into perspective we have organised the price of a weekly grocery shop into categories, to show how inflation could affect different parts of the country.

From the least to the most expensive, this is how the price could increase until 2030:

If you’re looking to keep the cost of your weekly groceries down to a minimum the best places to shop are Leeds and Sheffield. By the end of 2022, it could cost £63.60 a week for groceries, but by 2030 - despite being the cheapest place to shop - it could cost £146.58.

From one end of the affordability scale to the other, the most expensive place in the UK for a weekly shop is London. With an average monthly living cost of £3566 for a family of four, it’s no surprise that the capital city costs the most for groceries.

What About Other Big Cities?

Leeds, Sheffield and London are only three big cities in the UK, other cities such as Manchester and Liverpool and Birmingham take up a substantial portion of the population, too. So, how will places like these fare from high inflation?

Slightly further down the country in Birmingham and slightly more expensive than the two major north-western cities mentioned above, the average weekly shop could cost you £69.93 per family by the end of the year, and £161.16 in 2030.

Rest of the UK

We know that the UK’s population doesn't just reside in the above named places. So, if your area hasn’t been mentioned yet, we have the data for many other cities in the UK below.

Here is what the price of weekly groceries could cost for your family.

Hear from the Expert

"Several factors are conspiring to drive inflation higher. The rising cost of energy is the most important but this has been re-enforced by Covid-related supply-chain issues, labour shortages and the limited amount of food exported by Ukraine and Russia this year, compared to normal times. This improbable combination of negative factors explains the rapid jump in the rate of inflation.

When reading the figures in this report, it is important to bear in mind that they assume inflation will remain consistent at a rate of 11% until 2030. This is incredibly unlikely to happen, but the exercise illustrates what can happen when inflation gets out of control.”

So, to put this into perspective, if inflation reaches 11% in October, it means that the average family in the UK could be spending £3,994.22 on their weekly shopping over the next year. And if inflation were to remain constant at that level, it would mean they could spend £9,204.84 per year by 2030.

Want to know how we got to those figures?

We took the weekly grocery expenditure of an average UK family from the Office for National Statistics. These figures are based on expenditure of food and non-alcoholic drinks by place of purchase, large supermarket chains, other outlets and internet expenditure.

For each region the figures for 2021 have been calculated using a three year average from 2019 to 2021, as these are the most recent figures from ONS. They focus on food and non-alcoholic drinks expenditure per family overall, the exact place of purchase is not specified.

We multiplied each cost by the expected 11% rate of inflation, which was repeated year on year until 2030.

This Is Just the Beginning

If you were just hoping to gather some info on how much your weekly shop could set you back, you have all the data you need to know. However, if you were seeking out a simpler way to understand inflation, hopefully, this has helped, too.

A new decade will come around quicker than you think, and with the rising cost of living in mind this data aims to shed light on the possible reality, making it easier to plan and manage finances in the future.

More than a broker, Admirals is a financial hub, offering a wide range of financial products and services. We make it possible to approach personal finance through an all-in-one solution for investing, spending, and managing money.