When reading about the economy or the financial markets, it won’t be long before you run across the term ‘GDP’. In its simplest form, GDP is used to measure the size of a country’s economy, but, in reality, there is a lot more to it than just that.

So, what is GDP? How is it calculated? And what are the different types of GDP that exist? In this article, we will answer these questions, and many more. 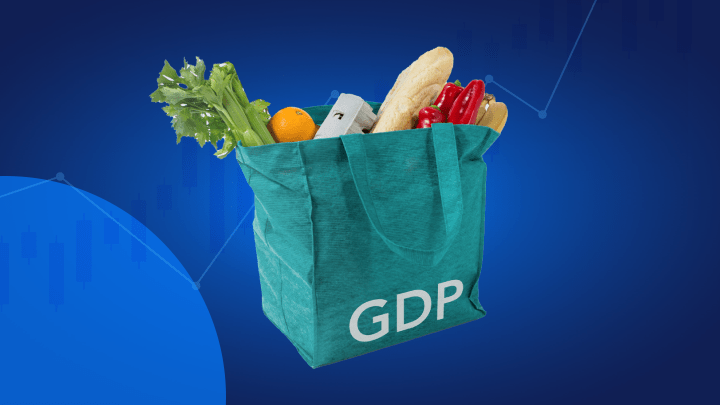 What Is Gross Domestic Product?

Gross Domestic Product (GDP) measures the total monetary value of all the finished goods and services produced within an economy over a specified period of time; usually monthly, quarterly or annually.

GDP is typically used to measure the total size of an economy, and also to measure how much an economy is growing in percentage terms over a period of time.

How to Calculate GDP

There are three different methods of calculating GDP:

In theory, if calculated correctly, all three of these approaches should arrive at the same figure. However, of the three, the most widely used is the expenditure approach, which measures total spending within an economy over a period of time.

How does one go about calculating the total expenditure of an economy? It is calculated by finding the sum of the following components:

Let’s take a quick look at each of these components in turn.

Consumer spending, or consumption, refers to all private spending by consumers on goods and services within the economy. This includes things like, a weekly food shop, transport costs or eating at a restaurant.

Consumption is the largest component of GDP, usually accounting for around 60% of total GDP in the UK. This is why consumer confidence is such an integral aspect of a healthy economy.

Government spending refers to all spending made by the government including investment in infrastructure and wages paid to government employees.

During times of economic turbulence, when both consumer and investor confidence is low, government spending can take higher significance in terms of total GDP. For this reason there is a school of economic thought (Keynesian economics) which believes that during an economic downturn, governments should boost spending in an attempt to revive economic growth.

Investment refers to both private investment made by individuals within the economy as well as investment by businesses, which is also known as capital expenditure.

Net exports is calculated by subtracting total imports from total exports (NX = exports – imports). It is an important component of total GDP as, depending on the composition of exports vs imports, it can – and, for many countries often, does – result in a negative figure reducing total GDP.

When net exports is positive, countries are said to have a trade surplus, whereas a trade deficit describes a situation where net exports is negative.

The Different Types of GDP

GDP is an important figure in itself, however, it is often adjusted to make comparisons between countries and time periods more accurate and is also used as a basis to calculate other important statistics. Let’s take a look at some of the most important variations of GDP.

Nominal GDP is GDP which has been calculated using current prices within the economy. Whilst this is all well and good when comparing GDP from different quarters of the same year, it becomes problematic when trying to compare current GDP figures to GDP in previous years, due to inflation.

This is where real GDP comes in. Real GDP adjusts nominal GDP figures to account for inflation over the same time period.

But, what if over the same time period, inflation was 100%? Adjusting the previous figures for inflation, Country A’s real GDP (expressed in GBP’s value in 2000) is still £100 billion. In other words, in real terms, Country A’s economy has not grown at all!

This is the most common way of expressing GDP you are likely to come across. GDP growth measures, in percentage terms, the change in GDP from one period to another.

It is used to express how much an economy has grown, or shrunk, and is usually measured year on year or, sometimes, quarter on quarter.

GDP growth tends to be the favourite statistic for journalists and economic commentators when describing the current health of the economy.

By comparing total GDP between two countries, we can easily tell which has the larger economy. But if one country has a population of 100 million and the other 10 million, then this is hardly a fair reflection of productivity or individual wealth within that economy.

To account for this, often, when comparing GDP between countries economists will divide total GDP by the size of the population, resulting in what’s known as GDP per capita.

By measuring what proportion of total GDP is accounted for per person, GDP per capita results in a fairer representation of an economy’s productivity and living standards.

Let’s look at how GDP per capita can change perspective with an example. The US and China are, by some distance, the two largest economies in the world, with second placed China boasting an economy roughly four times the size of third placed Japan.

So how does this change when we divide total GDP by the size of the respective populations? And what does it do to their global ranking?

Here, we see that, due to their large population sizes, the United States falls to 8th place, whilst China slides down to 64th. Luxembourg occupies first place with GDP per capita of $135,050 derived from its total GDP of $86.9 billion.

One could make the argument that using GDP per capita does not provide an accurate comparison of living standard as the costs of living can vary enormously from country to country.

Purchasing Power Parity (PPP) attempts to measure GDP in “international dollars” in order to adjust GDP figures for differences in the cost of living. Continuing with the United States and China, let’s see how PPP affects their GDP and GDP per capita rankings.

The tables have turned! Comparatively, the US is a more expensive country to live in and when PPP is accounted for China and the US switch places in the global rankings.

Once PPP is factored into GDP per capita, both countries slip down the global rankings.

You should now have a better understanding of what GDP measures, how it is calculated and some of the different ways we can use GDP to evaluate and compare economies.

It is by no means a perfect method of measuring an economy. For example, the GDP calculation does not include goods and services produced in the informal economy, which comprises of any transactions not officially recorded.

Particularly in developing countries, the informal economy accounts for a large percentage of total employment and transactions, meaning that official GDP figures do not always come close to reflecting the full size of the economy.

Also, GDP focuses solely on material output and does not reflect many of the costs to society incurred during production, such as environmental impact and inequality.

Most countries regularly release GDP figures - usually monthly, quarterly and annually – and have different departments which are responsible for their release.

In the UK, the Office for National Statistics (ONS) publishes GDP figures; in the US, it is the Bureau of Economic Analysis (BEA); and Eurostat is responsible for GDP releases for the Eurozone.