UK Homeowners Could Spend £50k on Energy Over Next 25 Years 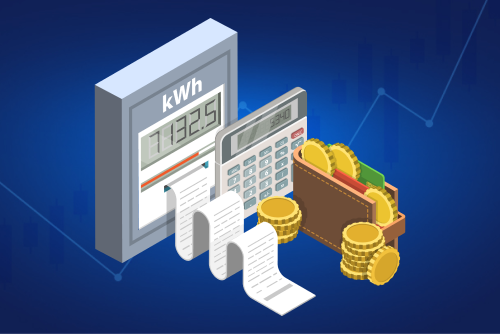 In recent weeks, a lot of news stories have been dedicated to the rising cost of energy bills in the UK. But how much will the average British homeowner be affected? In this article, we analyse the potential price increase in different regions across the UK and look at what these price increases could mean over the term of the average mortgage.

According to the Office of Gas and Electricity Markets (Ofgem), UK homeowners could see their energy bills rising by 54% before the end of 2022. In December 2021, the average UK household paid around £1,340 per year on gas and electricity bills. So, if these essential bills do rise by an estimated 54%, homeowners could be paying £2,120 by the end of the year. That’s over £700 more than before.

If energy rates were to stay the same, UK homeowners could end up spending over £50,000 on energy over the course of a typical mortgage (25 years). According to the Land Registry, who keep historical data on UK house prices, in 1990, the average price of a property was also around £50,000.

This means that, over the course of their mortgage term, new homeowners in 2022 could spend the same amount of money to power their homes that people in 1990 spent to purchase theirs! That unsavoury statistic out of the way, what do the exact numbers look like in each region?

We’ll cover from the most expensive regions for energy to the cheapest in England, as well as energy stats from Scotland, Wales, and Northern Ireland. And if your area doesn’t make it - we’ve got tables detailing the current average annual energy bill, and the predicted increase for 2022 in other regions of the UK.

Why Are Energy Prices Going Up?

But, first of all, why is this happening?

One of the key drivers of the recent surge in inflation has been the rising global prices of oil and gas and, unfortunately, this is now impacting household energy prices in the UK.

The pandemic caused many businesses to temporarily close, and forced citizens to remain at home. As planes stayed grounded and cars sat idly in driveways, demand for oil plunged and dragged prices down along with it.

As the world reopened and demand for oil recovered, the Organisation of Petroleum Exporting Countries (OPEC), who suppressed global oil production in response to the pandemic, has slowly raised its production targets accordingly. However, various countries have struggled to increase production and meet new targets, with the end result that demand for oil has recovered at a much faster pace than supply has been able to handle.

This was the state of play at the beginning of 2022, before conflict erupted between Ukraine and Russia.

Russia is responsible for the production of more than 12% of global oil and more than 16% of global natural gas. With the conflict ongoing and new Western sanctions against Russia announced almost every day, fears of a disruption to the global supply of these two commodities has forced their prices even higher.

“The fact that these price increases were going to impact household energy bills was inevitable and unavoidable. The only reason it has been avoided up until now has been due to government regulator Ofgem’s energy price cap, which prevented energy providers from raising their prices above a certain level. This price cap has now been increased, allowing energy providers to raise prices to reflect the soaring global cost of oil and gas.”

Regionally, the most expensive location for energy is the South West, where the average citizen currently pays £1,390 a year. By the end of 2022, this could increase to £2,196.20.

In comparison, the cheapest part of England for energy is the East Midlands, where energy currently costs £1,301 a year. But by the end of the year, this could increase to £2,055.58.

Here are energy stats over the next 25 years, together with average monthly and annual mortgage repayments. (The figures for North West and Merseyside also include North Wales.)

Here is a breakdown of what rising prices could mean for each region over 25 years: 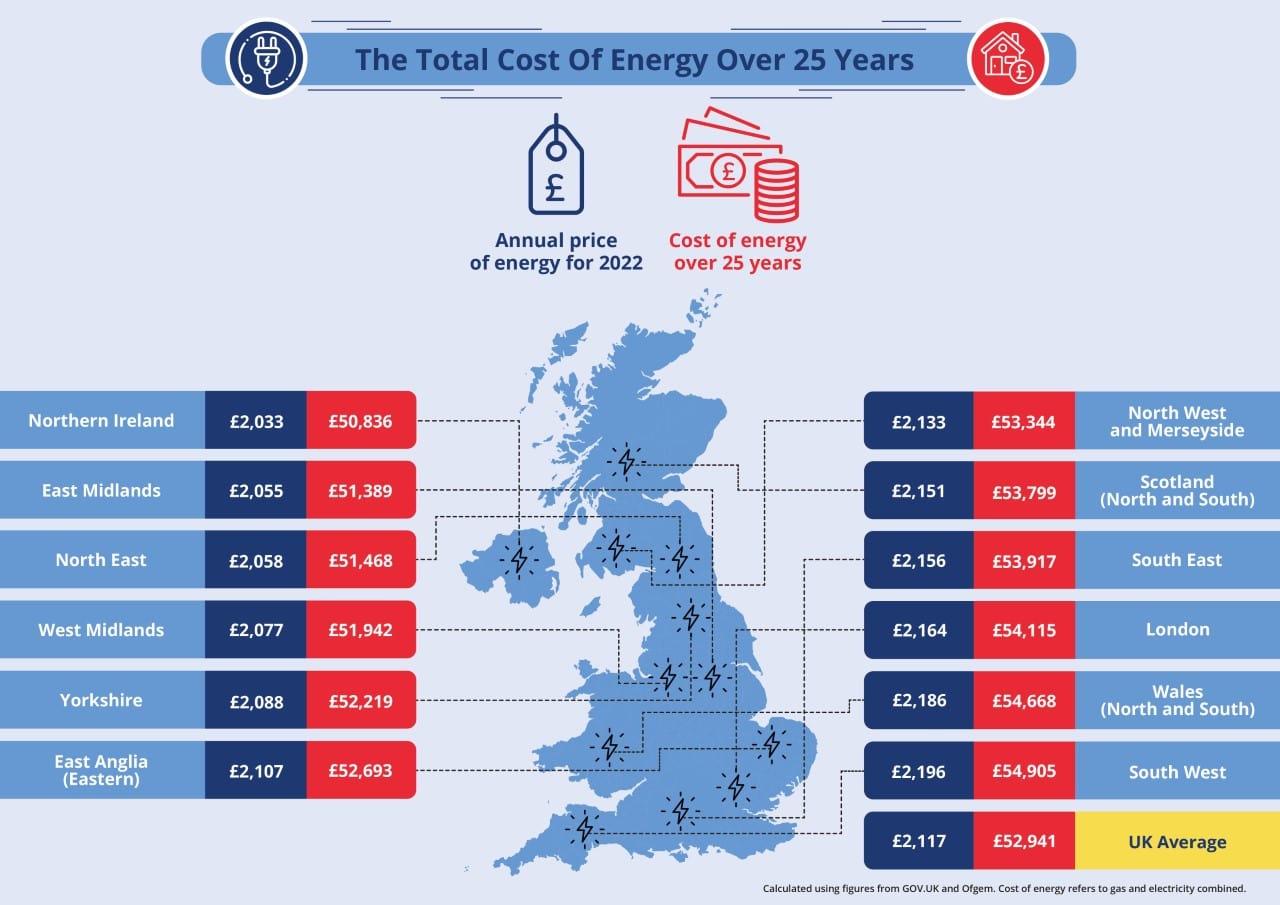 Roberto Rivero adds: “Although higher energy bills are no doubt concerning for everyone, energy prices are cyclical by nature, meaning that they won’t stay high forever.

Put simply, when global energy prices are high, oil and gas producers are incentivised to produce more to take advantage of high prices. This increase in production leads to supply gradually catching up with demand and, eventually, overtaking it, causing prices to fall.”

Hopefully, the current high prices and their cost to homeowners will reinforce the fact that we cannot continue to rely on fossil fuels indefinitely. Ideally, this will result in higher priority given to the global energy transition and more investment flowing into the renewable energy sector for the future

How Can You Lower Your Energy Bills?

If you need help navigating the energy crisis, there are changes you can put in place to try and numb the sting. From short term solutions like swapping to LED light bulbs, to longer-term investments like making sure your home has effective insulation, making these changes can make all the difference. In fact, The Energy and Climate Intelligence Unit (ECIU) revealed that having new insulation installed can save households £200 a year over 10 years.

And with the Energy Efficiency Infrastructure Group asking the government to prioritise energy saving through these kinds of home improvements, they’ve even said that UK households could save more than £500 a year on energy bills. Imagine what that could look like over 25 years.

The cost of energy for each region in England, Scotland, Wales and Northern Ireland was calculated by multiplying the price of energy from 2021 (obtained from GOV.UK) by Ofgem’s energy price cap increase of 54%.

We then worked out the average annual mortgage figures by multiplying the Statista average monthly mortgage repayments (all featured in the above tables) by 12 months of the year.

Using the average monthly mortgage payments for different regions, we then calculated the average amount consumers can expect to pay over 25 years for their mortgage, allowing readers to compare this figure to their total energy costs.

Essentially, we wanted to show UK homeowners the scale of the price increase, and demonstrate the impact of rising energy costs on the average UK homeowner. Breaking down the price increase into different regions and comparing it to mortgage repayments over a quarter of a century allows readers to put these figures into perspective.

It is important to note that these figures are purely illustrative and have been estimated using average energy bill figures and projected price increases for 2022. In order to find out how much more you will be paying for energy this year, please contact your energy provider. Furthermore, figures projected over 25 years have assumed energy prices remain constant during this period, which, given the cyclical nature of energy prices, is highly unlikely.

More than a broker, Admirals is a financial hub, offering a wide range of financial products and services. We make it possible to approach personal finance through an all-in-one solution for investing, spending, and managing money.