Inflation Rates - Impact on the Economy and Markets 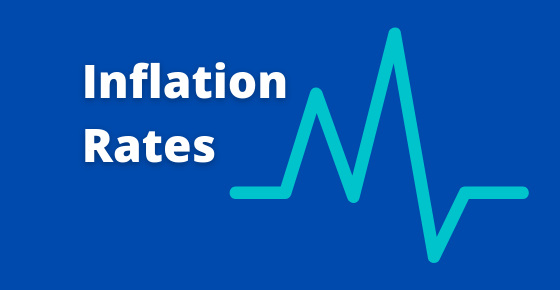 An investor’s journey follows the main highway on any economy’s map - inflation rates.

Our first destination on the inflation rate highway is the world’s central banks.

How do central banks control inflation?

Every country or region has a central bank with a board of monetary policy makers who monitor inflation rates for signs of overheating or underperformance.

Monetary policy is simply the management of a local currency in relation to economic conditions at home and abroad. Inflation rates and price information help central banks to carry out their mandate by showing the level of demand for goods and services.

When demand is high and the supply of goods or services is limited, prices may overheat - leading to higher inflation. If demand is strong and supply is plentiful, prices may remain stable or even drop. Another scenario is low demand and plentiful supply, meaning subdued price growth.

When we look at individual commodities, petrol prices are a good indicator of price inflation.

If petrol prices rise too quickly and it costs more to fill up your gas tank, this means rising inflation due to increasing demand or limited supplies. Temporary jumps in inflation rates are common due to geopolitical events that limit the supply of crude oil used to make petrol for vehicles.

If petrol prices rise slowly and supplies are plentiful, it could mean that the underlying economy is growing and there is more demand for transportation and travel.

When petrol prices are low and there are no supply limits on crude oil, it’s most likely a case of sluggish GDP growth and limited demand.

Policy makers aim to keep inflation at a reasonable level so that goods and services aren’t too expensive or too cheap. If they’re too expensive and inflation is high, large sectors of the population cannot afford them and the local currency may lose value.

How do inflation rates affect businesses?

If prices and inflation are underperforming, companies receive less revenue and profits - meaning that they pay lower salaries to their employees. Lower salaries mean less spending on goods and services.

Economists agree that - under normal circumstances - central bank policy should focus on keeping inflation rates at a target of around two percent in order to encourage price stability and support spending power.

Governments and central banks spend a lot of time and money researching consumer spending to understand current and future inflation trends. National statistics services collect price information from a basket of goods and services on a monthly basis to keep track of inflation rates on a monthly, quarterly and annual basis.

The inflation rate refers to the differences in the CPI between one time period and another. The current CPI results are compared to previous results on a monthly, quarterly or yearly basis. The differences are expressed in a percentage which is called the inflation rate. This benchmark helps to understand the developments in price stability.

“If inflation is too high or it moves around a lot, it’s hard for businesses to set the right prices and for people to plan their spending.” Bank of England

Monetary policy makers use inflation rates to set interest rate guidelines. If they see price inflation rising too fast, central banks tend to hike interest rates so that borrowing and spending on goods and services becomes more difficult. In this way, demand is controlled and prices should return towards target levels.

Central banks also take supply levels into account. If supplies are limited and there is a distortion in supply chains, monetary policy makers have to understand how long it will last and whether it will have a short-term, medium-term or long-term effect on prices.

Monetary policy makers have to take many factors into consideration when setting interest rate guidelines but inflation and price stability are their primary considerations.

How does inflation affect GDP growth?

To put a complex matter in simple terms, inflation can show us whether the economy is growing, staying the same or shrinking. The target rate of two percent can give us a benchmark to compare different scenarios.

Inflation of around two percent usually indicates that the economy is normal and growing.

Inflation of under two percent could indicate a shrinking economy or an economy that is recovering.

When inflation is over two percent, the economy may be growing too quickly or there is a mismatch in demand and supply.

Finally, our inflation rate highway takes us to the government’s fiscal policies and liquidity position.

Governments issue sovereign debt to international and local investors and repay it with tax and other state revenues. What effect does inflation have on sovereign bonds? It depends on whether inflation rates are rising or falling.

Sovereign debt issuance, also known as national bonds, is an important source of funds for most governments. When inflation rises, it usually means a growing economy. In this scenario, government tax revenues are likely to be strong and sovereign debt repayments are not going to be a problem. There is one note of caution here – if inflation rises too quickly because of supply problems, so will interest rates, meaning a rise in the interest repayments on government bonds.

When inflation rates head downwards, tax revenues may track the same course and governments could run into difficulties repaying their bonds if their cash reserves are low. By the same token, interest rates may fall along with inflation, meaning that government bond repayments would be lower.

As you can see from the brief trip to the landmarks on the inflation rate highway - the financial system, fiscal policy and monetary policy are all affected by price stability as defined by inflation rates.

Sarah Fenwick's background is in journalism and mass communications. She has worked as a correspondent covering Swiss Stock Exchange news and written about finance and economics for 15 years.