What Is the Difference Between Cyclical and Non-Cyclical Stocks?

But what is the economic cycle? How can investors identify cyclical and non-cyclical stocks? And how can they use this information to their advantage? In this article, we will answer all these questions and many more! 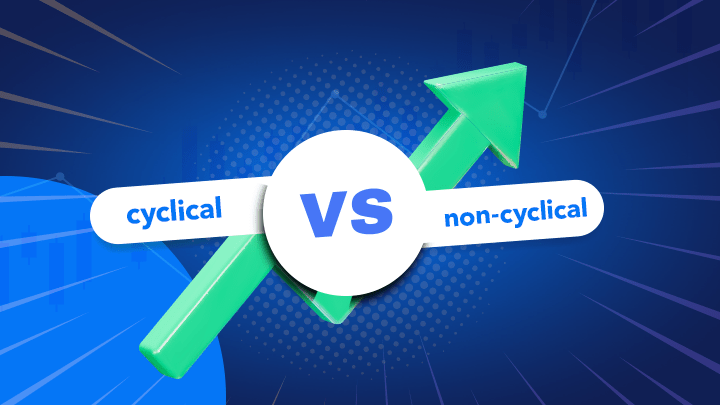 What Is the Economic Cycle?

First and foremost, in order to properly explain the difference between cyclical and non-cyclical stocks, we must first explain what the economic cycle is.

The economic cycle is the term given to the various stages which an economy goes through as it grows and contracts. These four stages are expansion, peak, recession and recovery.

As the economy reaches its peak and starts to “overheat”, inflation begins to gather pace. At this stage, central bankers tasked with controlling inflation, begin to apply the brakes, raising interest rates and restricting the money supply. Governments too, often help things to slow things down by reducing their expenditure. If done perfectly, these actions can help control inflation without damaging the economy.

However, perfection is extremely rare and the above actions are often overdone and end up tipping the economy into a recession.

Understanding the stages of the economic cycle is important for investors. Whilst there is nothing that they can do to influence these stages, they can react to them by adjusting their investment portfolio accordingly. This is where cyclical and non-cyclical stocks come in.

What Are Cyclical Stocks?

As mentioned already, cyclical stocks tend to follow the cycle of the overall economy. In other words, cyclical stocks generally thrive when the economy is expanding and, subsequently, their share price tends to rise.

Conversely, when the economy is in contraction, cyclical stocks do not tend to perform well and this is normally reflected in their share price.

Therefore, generally speaking, cyclical stocks are desirable to investors during an economic expansion, but generally not desirable at times when the economy is contracting. This tends to be reflected by investors’ actions, many of whom rotate out of cyclical industries during times of economic turmoil.

So, how can you identify cyclical stocks?

How to Identify Cyclical Stocks

It is perhaps quite intuitive to work out which types of companies operate in cyclical industries. They tend to be companies which produce discretionary goods and services – in other words, goods and services which people consume when they can afford to do so, but which will quickly be stripped out of a budget when times get tough.

However, as well as companies which produce discretionary goods and services, cyclical companies include those whose performance can be more directly linked to the economy, an example of which we will look at in the next section.

Typical examples of cyclical industries include the following:

What Are Non-Cyclical Stocks?

How to Identify Non-Cyclical Stocks

Typical examples of non-cyclical stocks include:

Understanding the economic cycle and the difference between cyclical and non-cyclical stocks can be very useful to investors.

When the economy is expanding, it is not uncommon for investors to weigh their portfolios more heavily with cyclical stocks, as these companies tend to benefit most from economic growth. Conversely, when a downturn occurs, or is suspected, investors often rotate out of cyclical stocks and towards defensive stocks.